Publishing things online is scary. You’re exposing something you’ve worked on, like this post, to the world. You care about it but the internet can be a cruel, cruel place. Of course you don’t want to expose it, be it a tweet, drawing, essay, video, project, or even a startup, to the possibility of criticism. You like it just the way it is.

As someone who publishes things on a regular basis, I’ve mostly gotten over the fear of pressing publish. It never completely goes away, but it definitely decreases over time. There are 2 things that I often remind myself that help me care a lot less when publishing anything.

Like everyone, I’ve been glued to coronavirus trackers lately, specifically the one on worldometers. If you go to their homepage though, you get to a bunch of other interesting counters. 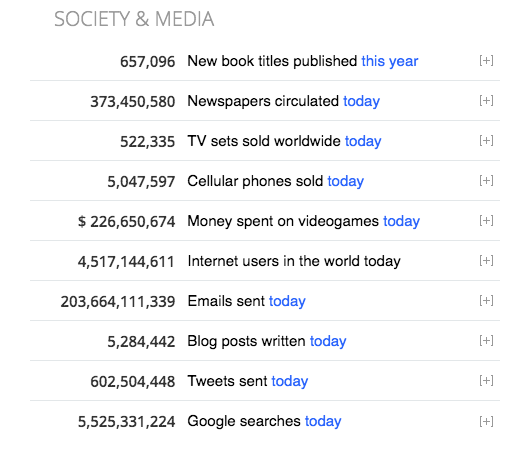 Watching it is humbling, really. The blog post count increases by about 80-100 per second. But it’s also pretty depressing if you’re creating anything. How is your thing supposed to compete with the millions of other things published that day?

For me, the same facts that would discourage me from publishing something online are also the ones that encourage me. People will probably forget about it and it will probably get buried under millions of other things. Yes, that’s discouraging, but also encouraging if you’re afraid of failure. If I knew that this blog post would be published to the top of every Facebook user’s newsfeed, I’d be much much more afraid of publishing than if I knew it will only reach a few people. Guess which is more likely.

We give ourselves the best chance at growing when we become aware that we probably will fail and that it won’t matter. Worst case scenario, and what will most likely happen, is that nobody will see it. And even if they do see it, they’ll probably forget about it shortly after. If it’s really good work and you keep at it, I believe the internet will reward you eventually.

So, the next time you’re scared to press publish on anything, remember, chances are not many will see it or remember it.

“We are more often frightened than hurt; and we suffer more in imagination than in reality.” – Seneca