For the last couple years, I worked as a front-end developer for a small software company. I think I’m decent at doing front-end, but nothing gives me the rush and enjoyment that launching a new product does. And I just wasn’t getting that from my old job. But the fact that I was only an average developer always got in the way of my projects. Figuring out how to do something took me way longer than it should have and it delayed launching the project. The longer you delay launching, the less likely you are to ever do it. They’re all pretty simple projects that a better developer could have hammered out in 1/10th of the time. So I had to come up with ways of launching faster. The way I see it, there were a few options:

I decided to test out option #3. I still work on my dev skills, but I want to explore some other options that may help me launch things faster.

So I signed up for Bubble which lets you build software without writing code.

Deciding on a project to work on

I love food. I also love cooking for people I love. And if I hear of a great food spot, I will travel to go try it out (foodies will understand).

When you try to find new places to eat, you have plenty of options: Yelp, Foursquare, Google Places, or food blogs/sites like Eater or The Infatuation.

And they’re great for the most part, but I was looking for something different. The issue with a lot of these sites is that they review restaurants, meaning not just the food, but also the service, ambience, etc. If someone went to a place that serves some of the best ramen in a city but they had a bad waiter, they could give a low-star review. It’s completely subjective.

I don’t think foodies care about that. All they care about is the food. Whether the ramen place is a hole in the wall, or a 3-star Michelin restaurant, all that matters is: does the ramen taste good or not.

When I visit a new city, or even when I’m exploring mine, I want to know “who makes the best burger/ramen/fries”. If you ask enough people what their favorite place to get whatever is, you’ll eventually hear the same places over and over. It becomes somewhat objective.

Before starting, I knew there were 2 things I wanted to stick to:

It had to be all about the food and the visitor should be able to immediately figure out where is best to get a certain dish.

The design/structure I decided on is that for every city, there would be a list of specific dishes, and for each dish, a list of places to get it. Each place has a vote tally attached to it and it’s sorted by votes. So at a glance you can see where people think the best place to get whatever is in a city. Just like this: 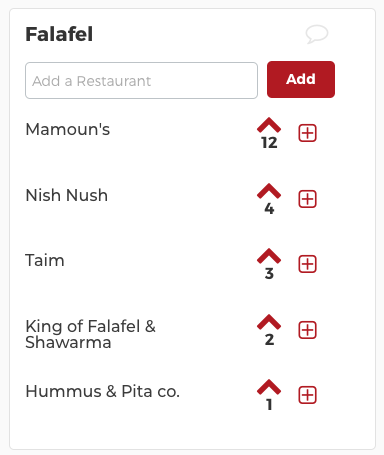 I use Reddit, Product Hunt, and Hacker News regularly so I’m a big fan of their upvote system of surfacing the best things to the top. They function differently though. For example, on Reddit, you can upvote and downvote a post whereas on Product Hunt you can only upvote.

I decided that if we’re looking for the best place to get a specific dish, the only thing that matters is the top, so only upvoting is allowed. I also didn’t want to risk a situation where a group of people could systematically downvote a restaurant off the top the list. It’s a lot less risky if that can only happen going up.

Another requirement is that it’s all about dishes, meaning cuisines are not allowed. If someone posts “Mexican” or “Indian”, or anything general like that, I will remove it. In fact, the kinds of dishes I want people to add are super specific like kouign amann.

I also wanted to launch quickly and using Bubble I was able to get a working version in 3 days. I’m sure it could have taken a more experienced developer that amount of time in code, but I saved vast amounts of time. I’d rather have a no-code project launched than yet another unfinished coded project.

This isn’t the first product I’ve launched, but each one comes with its own set of difficulties. One thing that makes it a heck of a lot easier is launching to an established audience. Thanks to Reddit, I found a few local food subreddits. These groups were perfect because they had large numbers of people, they were obsessed with food, and they were all concentrated in a city.

The launch in each city’s local subreddit went quite well. In each of the subreddits, the posts became some of the top of all time, and got dozens of comments. Unfortunately most of the visits to the site show up as direct so I can’t attribute them to subreddits. I launched the first city (Toronto) on January 1st and in that month TasteJury received 3,001 new unique visitors for all 4 cities. 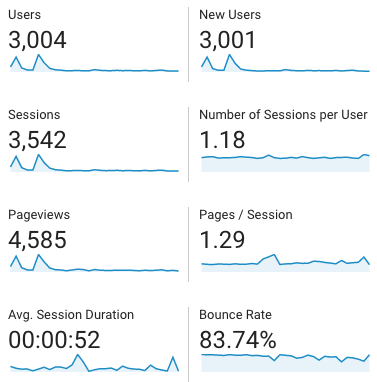 I wasn’t sure at first how willing people would be to add dishes and restaurants, but my worries were all for naught. So far users have added:

These numbers really surprised me.

I did do a few things that made it easy for people to add things though. When I initially launch a city, I open it up for anyone to add dishes, add restaurants, and vote. (Initially it was only allowed for people with accounts, but a smart reddit user convinced me to open it up to everyone, at least at first)

I realize that allowing anyone (without an account) to vote is problematic, but with small, focused communities who love food, the risk was actually pretty low. The results of the votes compared to other “best dish” lists seem to match, so I’m happy. I’d rather have lots of mostly accurate data than no data at all. Once there are lots of results, I close additions and voting and only allow it for people with accounts.

That leads me to the next part: users.

I wasn’t sure if people would actually sign up for this, but it turns out they would. About 70 people have made accounts. After getting initial data, I closed voting to the public and only allowed it for signed in users. I also added a feature that lets people add places to their wishlist - an extra incentive to sign in and a useful feature for people traveling to one of the cities. Having sign ups really helps in terms of feedback as well. Once I had about 50 people signed up, I sent them all an email asking why they did. I got some enlightening responses that will definitely guide future product decisions.

What I would have done differently

Of course there are endless more cities to launch to, but one thing I would have done differently is waited longer between launching cities and making improvements between them.

For me personally, I got a rush whenever I got major traffic from a subreddit. To keep that going, I just launched another city. But I should have waited and made more improvements.

I’m still making improvements, but there are only so many local food subreddits to easily launch to.

TasteJury only has a chance of working if it receives lots of traffic. So my next step is to figure out how to bring sustainable traffic to the site. And once I do that, I need to determine whether a site like this can make money (especially since it’s built on Bubble).

Got any ideas? Let me know!